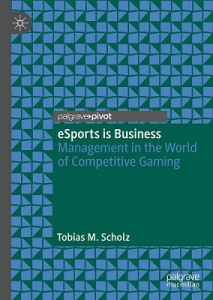 Tobias Scholz’s book ESports is Business: Management in the World of Competitive Gaming (2019) is the first academic book published explicitly on the business side of esports, and as such, certainly a required reading for all scholars interested in esports and competitive gaming. So far and excluding a couple exceptions like T. L. Taylors 2012 book, our knowledge of esports-related businesses has derived largely from news articles, journalists, and even social media, which makes Scholz’s book an important publication. That said, the tone of ESports is Business remains introductory, and therefore sets an expectation of deeper future studies.

Scholz states in the introductory chapter that the phenomenon of esports will be “analyzed in depth based on various theoretical frameworks rooted in strategic management theory” (11). The book first goes through the history of esports from a management perspective in order for “the reader to grasp the underlying principles” (11). Chapter 3 focuses on identifying and describing the internal and external stakeholders of the esports ecosystem, and in Chapter 4 Scholz lists and describes the system’s underlying and unwritten principles. Chapter 5 is about the interaction between business models present in esports, and the final Chapter 6 speculates with future possibilities. Throughout the book Scholtz aims to provide detailed descriptions and focus on the interaction and interplay of various actors from the perspective of different business administration theories.

While the theoretical principles of business administration are described and explained in great detail, the content focusing on esports is often relatively superficial and does not always analyze the issues very deeply. The interplay between esports business and the rest of the esports ecosystem is sometimes missing. For example, discussing the history of esports more explicitly from business perspective instead of the relatively familiar narrative of listing events and games would give better context of the matter to the reader.

Scholz considers the esports industry special in comparison to more traditional industries in how agile it has been from the very beginning, with the fast paced change and development in particular. In addition, esports was born global and digital, and is one of the first industries that are now trying to better reach the local and analog audiences. This developmental path has been the opposite to those of previous industries, and many have greatly struggled in their endeavors to move onto the digital and online markets.

Finally, Scholz introduces a perspective relatively uncommon in both popular media and scientific academia: esports as ungovernable Wild West, where the metaphor of Wild West should be seen as a land of opportunities rather than as a land of chaotic threats. Most academics who have discussed esports governance and institutions in esports have concluded that the current system is insufficient and some kind of a governing body or the very least more direct legal consideration is needed. Scholz rather sees this esport industry’s unregulated and ‘lawless’ state as an opportunity for the businesses to grow; external regulation would hinder the industry and it is better to just leave it be and self-regulate if and when needed. He states that the current method has worked so far: the industry has developed regulations when they have been needed and that there is no reason why it would not work in the future.

The most interesting insights of the book are in the chapter focusing on stakeholders. The discussions of this particular section are definitely among the most detailed and deep. Especially the primary stakeholders and differences between them are discussed and explained comprehensively, and their respective problems and effects on the industry are considered. Scholz explains the different approaches developers have had in managing their particular titles and their competitive communities; he continues with tournament organizers and the processes of creating a major tournament when developers are (not) able or willing to organize their own competitive scene; with pro teams their problems in funding and longevity are discussed, and the analysis of pro players is refreshing as it considers the matters also from other perspectives than the biggest stars. Scholz does not forget the providers and communities involved in esports either; these include the different organizations and companies that support related activities and enable the phenomenon to exists by their service (news coverage, law and talent agencies, etc.), infrastructure (streaming, training, event organizers, etc.), hardware (computer equipment), and communities that organize local events such as viewing parties.

The greatest limitations of the book are in the chapters discussing governance. Be it about the sporting world wishing esports to develop similar governance structures as traditional sports, the unwritten governing principles or the Wild West metaphor of esports, Scholz has a bias for the independent esports businesses. He sees esports as an industry that should govern itself completely without outsider constraints, and justifies the view by arguing that it has worked well so far: the current growth and popularity are the only evidence. Scholz asserts that “necessary solutions and governance principles emerge when a problem becomes apparent” (76).

While the above perspective makes a point, it is one sided and ignores even some of the primary stakeholders such as professional players. Throughout the history of esports, there have been several cases where the only course of action for a professional player to seek justice when wronged has been social media. The unfair treatment of professional, semiprofessional, and amateur players by the other stakeholders is an ongoing problem with limited emerging solutions and governance. Individuals tend to be the weakest stakeholders in the scene, and efforts to protect their rights are left undiscussed.

In conclusion, ESports is Business is an interesting book that could have been even more. While the issues that Scholz discusses in the book are timely and intriguing, taking the discussions further would have been possible with the relevant additions of (business) ethics and more direct comparisons to other (online and digital) industries. The book has a clear pro-esports bias, and toning it down a bit with critical remarks would have benefitted the total. Still, this book has been needed and refreshes the esports scholars of academia with a topic that few, if any, have discussed to this length and comprehensiveness before.